BMW introduces an all new M5 commemorating 35 years of the performance car gracing the roads.
The 2020 BMW M3 was spied testing on the Nurbergring and so was the 911 Turbo S Cabrio.
The next-generation Opel Astra is all set to get a facelift and Mitsubishi boss confirms that they are not going to exit North American market.

Here are five interesting car news you should know today.

The BMW M5 is commemorating its 35 years in production, and we are having a hard time believing that its been this long! We are super happy that it is though, and is one of our ‘must own’ sportscars in life. Keeping that in mind, it would be disrespectful for the car’s 35 birthday to pass sans a special edition. So here it is, the BMW M5 Edition 35 Years edition- only 350 will be made, all of which makes 617 hp.

The 35 years edition is based on the M5 Competition model which has a 4.4-liter V8 under its hood. The designers have went for a grey-dark-gold theme through out the variant, with optional packages like ‘Executive’ and ‘M Driver’s’ provided as standard.

Obviously, all these will cost a lot of money- $128,995 to be exact. Only 35 will come to USA with production expected to start by October.

The 2020 BMW M3 has been spied twisting and turning through the laps of Green hell. It’s hard to make out under heavy camouflage but design should not veer too much from the basics. What will change is the performance, with the engine, AWD and almost everything tuned for a little more bite.

Power comes from a turbocharged in-line six that could produce 473 hp as standard, and over 500 hp in ‘Competition’ form. Both will get an advanced AWD system that will help the ‘larger’ body to ease through the curves. For the more conservative of us, BMW is expected to provide a ‘Pure variant’ with manual transmission and no AWD!

Another car hitting the Nurburgring this week is the Porshe 911 Turbo S Cabrio. The new-generation standard 911 debuted six months ago and it’s almost time for higher variants to come out. We will see the 911 Turbo later this year, followed by a Cabrio, and while this particular mule looks near-production, it will most probably the last model to reach dealerships.

The 911 Turbo S was spotted tearing through Brunnchen section of the track and looked pretty comfortable negotiating the right-handers. On closer look, there are a lot of testing equipment inside the car- maybe it’s not production-ready after all.

Power comes from an awesome flat-six that is rumoured to produce upward of 600-hp on the Turbo. The Turbo S could do even more- near the 650 range. 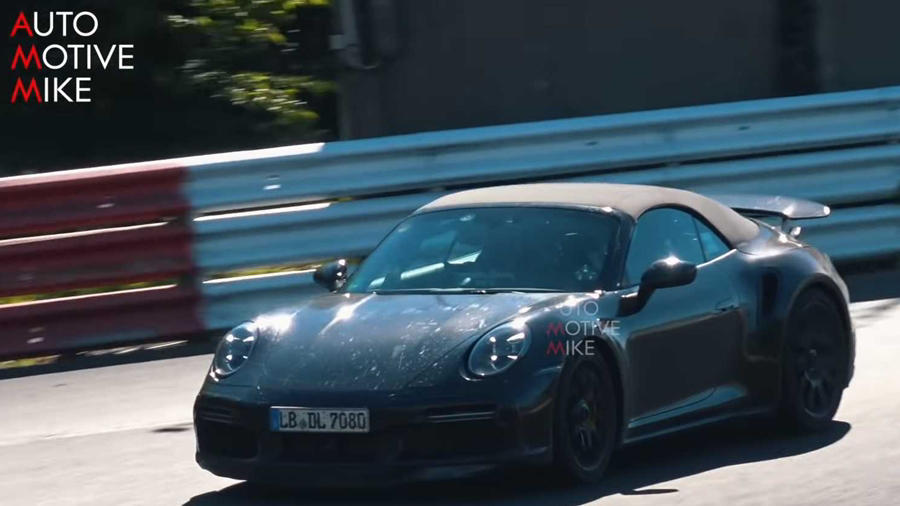 Open Astra Wagon facelift spied: After the Astra hatchback facelift, we get our first look of the upcoming Astra Wagon facelift. The test mule is only camouflaged at the front, indicating where exactly all the change are. We expect new grille and a full-LED headlamp cluster.

The sides and rear look identical to the outgoing model, save for an ‘interesting’ EcoTec D badging on the boot. This means that there will be diesel option which in all probability is sourced from Peugeot. Specifically, the 1.5l BlueHDI mill producing 102 hp ( not the 1.6 liter they have).

Mitsubishi to continue in USA

Takao Kato- soon to be CEO of Japanese automaker Mitsubishi has confirmed that the brand will continue in North America. He said in a recent interview with Automotive News that North America is one of biggest markets and exiting isn’t an option. They will instead rework their brand strategy to aim for small but steady growth.

There also rumours of Mitsubishi bring back trucks to the States, built on a shared platform from Nissan-Renault-Mitsubishi alliance.

A different ‘Honda E’ car might come to USA!

How clean is Solar Power, really? [Carbon Debt and liability]